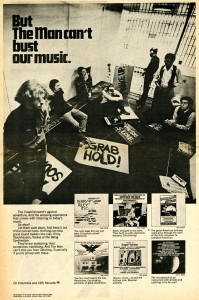 As a comparatively old person, I think in albums. No song from the second side of “Abbey Road” sounds right to me unless the whole thing is played in order. And don’t even get me started on the proper way to listen to “Dark Side of the Moon.” Nevertheless, I can see the appeal of being able to buy single songs at a time.

I’ve been going over my CDs lately so that I can upload some of them to Amazon Prime Music and listen on my phone if I so choose (which pretty much proves right there that I’m not THAT old, but that’s besides the point). While doing this I discovered a disc that I had labeled “ITUNES1,” followed by the date 12/28/03.

Basically, it’s hits that I liked from the 1990s from albums that really stunk, and I’m pretty sure that it’s the first iTunes disc I ever made. Take this one, for example:

Yes, it’s cool that Chumbawamba was an anarchist collective, but the next song on that album was called “The Good Ship Lifestyle.” I remember that when I began to play the whole album at my then-girlfriend’s apartment thinking that song was absolutely insufferable Marxist garbage, so I stopped listening right there.

Unfortunately, I have a problem when it comes to uploading this particular collection of eleven-year-old purchases. My iTunes program can no longer read it anymore.  And a similar problem comes up again and again. Take Feist, for example. In that case, which I think was from 2008, I liked the single – Yeah, I first heard it on an Apple commercial, you gotta problem with that? – and the whole album but apparently I can’t do anything with this file because I bought it on another computer.

As this was happening, I couldn’t help but think of Thomas Frank. Yes, Thomas Frank the political columnist, but back in the 1990s he was Thomas Frank the historian. To me, he was the guy who made that “But the Man Can’t Bust Our Music” ad famous in his 1997 book, The Conquest of Cool. Basically, that book is about co-optation. To paraphrase Abbie Hoffman, it’s about how ad agencies took the energy from the streets  and re-directed it in order to sell goods. That ad is basically exhibit one in this process since it was put out by Columbia Records, which was (and undoubtedly still is) part of a rather large corporation.

What I didn’t remember until I Googled up that ad and read it again is that it is mostly trying to sell synthesizers. [It’s probably too fuzzy for you to see in the above, but one of the records pictured there is actually for “Switched on Bach,” a fixture in my elementary school music classes.] Somehow, I don’t think of synthesizers as being an essential element in a musical rebellion. Indeed, electronic music strikes me more as just another sign of corporatization. After all, you probably needed a record contract just in order to afford one. After all, look what they said about Bob Dylan when he went electric at Newport in 1965.

Wait a second!!! What does all this have to do with higher education? I’m getting there. I’ve been reading Music for Deckchairs for so long that I could actually dig up this 2011 post in which Kate found an old ad from the American Federation of Musicians:

Here is a struggle of intense interest to all music-lovers. If the Robot of Canned Music wrests the helm from the Muse, passengers aboard the good ship Musical Culture may well echo the offer of Gonzalo, to trade “a thousand furlongs of sea for an acre of ground”. Are you content to face a limitless expanse of “sound” without a sign of music?  Monotony in the theatre – corruption of taste – destruction of art. These must inevitably follow substitution of mechanical music for living music.

Of course, she then went on to compare that sentiment to the situation faced by university professors even before the “Year of the MOOC” had begun:

Are we in the same position? Is the Muse of Education threatened by the Robot of Educational Technology? Just as in 1931, this oversimplifies a tangled weave of innovation, business speculation, consumer demand and freak opportunity. Technology isn’t exactly designed in a vacuum, and is capable of doing most of what we might wish for. So the edtech that we have tells us a great deal, symptomatically, about the wishlist that higher education has revealed to its would-be suppliers through the way that we speak about growth, mobility and risk—and perhaps the lesson from the current emphasis on analytics is that we should be careful what we wish for.

[Yes, you Johnny-Come-Latelies, Kate has been writing that well for centuries in blog years.]  So, MOOCs are essentially dead and live performances still occur. The revolution lives, right?  Well…not exactly. Rather than talk about automation, in the spirit of Thomas Frank I want to talk commodification.

When those old American Federation of Musicians played, the music was an ephemeral experience. People heard it and it was gone. When they recorded that music on vinyl, those records could be sold, and most artists came around to this situation because many of them made a good living on record sales alone. When people bought those records (or CDs for that matter), that music was theirs in the physical object sense. My compact disc collection is large enough that I can keep myself entertained for days. I wouldn’t be uploading any of it to Amazon’s cloud if I didn’t know that that music was still in my possession.

Now imagine recording your lectures on videotape. If you do it on the university’s equipment, is it still yours? This guy from Brigham Young started a company to market his own videos, but what happens to those of us who record ourselves and don’t have good intellectual property clauses in our employment contracts? Come to think of it (and I’m pretty sure I saw someone asking this question on Twitter recently, but I didn’t mark the Tweet), what happens to your online course materials if you switch universities? In particular, what happens to your online course materials if you’re an adjunct? Perhaps these tools aren’t valuable now, but if people can mine Tweets for gold you know the faculty’s pedagogical product will be commoditized eventually.

I may be comparatively old, but you all know that I am no Luddite [Now Chumbawamba, on the other hand…]. Therefore, I’m not telling you to bypass teaching with technology.  What I’m saying is that you have to be your own producer. Be your own agent. Heck, it would probably be best for you to be your own record company too. This is the only way that you can assure that The Man will be unable to bust your music.

History professors and technology: Why can’t we be friends?

BYOB (Be Your Own Boss).