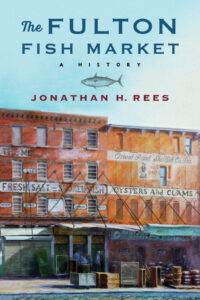 The Fulton Fish Market stands out as an iconic New York institution. At first a neighborhood retail market for many different kinds of food, it became the nation’s largest fish and seafood wholesaling center by the late nineteenth century. Waves of immigrants worked at the Fulton Fish Market and then introduced the rest of the city to their seafood traditions. In popular culture, the market—celebrated by Joseph Mitchell in The New Yorker—conjures up images of the bustling East River waterfront, late-night fishmongering, organized crime, and a vanished working-class New York.This book is a lively and comprehensive history of the Fulton Fish Market, from its founding in 1822 through its move to the Bronx in 2005.

“Rees’s superb book is much more than an excellent history of the Fulton Fish Market—it’s a history of an important dimension of New York City and, to an extent, a history of seafood in America. It is beautifully written with excellent documentation, and it’s a delight to read!”