Skip to content
At the risk of sounding like one of the several thousand Republicans now running for President, I want to make a slippery slope argument here:

Point 1: The Monster Turns on its Maker.

Ms. Ebbeler spent nearly two years building an online version of “Introduction to Ancient Rome” with a team of designers at the University of Texas at Austin, where she is an associate professor of classics. Most of the heavy lifting came during the last academic year, when one of her colleagues taught the course to hundreds of undergraduates while she coordinated behind the scenes.

The process was challenging and occasionally chaotic, she says, but her team learned a lot about how to make the online course work. Which is why she was frustrated when her bosses declined her request to teach the course next year.

Why is this important? Because nobody seems to be controlling their own monsters:

Orchestrating a smooth handoff of an online course is a relatively new challenge for Austin’s classics department. Elsewhere it has become normal for professors to relinquish courses they helped create, especially if those courses were built in a format that places content, not the instructor, at the forefront of the student experience.

What’s that you say? Your online course isn’t a monster? No, it probably isn’t, but it will be if somebody inserts an “Abby Normal” brain in it.*

When people go over to the graveyard and dig up any old body to bring back to life. Staying in the South-Central part of the United States, here’s a member of the University of Oklahoma History Department reacting to news that her university has teamed with the History Channel to offer the second half of the US History survey online outside the department’s purview:

I am a tenured professor in the History Department at OU. This course was created with zero input from our department. From the little information I have gleaned from press reports, it fails to meet the basic requirements for a general education course. There are no exams, very little reading, and a total 6-10 pages in writing assignments.

Laura Gibbs is my source for all things OU/History Channel. Here’s her screenshot of OU discounting that online history class so that it can cannibalize the face-to-face history department’s enrollment: 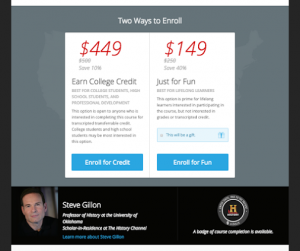 Of course, the history department there could have stormed the gates of the administration building in Norman with pitchforks and torches, but that’s not civilized, is it?

From this morning’s NYT:

“We host one of the most renowned faculty in the world,” boasts a woman introduced in one promotional video as the head of a law school. “Come be a part of Newford University to soar the sky of excellence.”

Yet on closer examination, this picture shimmers like a mirage. The news reports are fabricated. The professors are paid actors. The university campuses exist only as stock photos on computer servers. The degrees have no true accreditation.

I’m reminded of a passage from Marc Bousquet’s How the University Works. “We’ve already done a pretty good job of translating education into information delivery over the past thirty years,” he writes. “This substitution has been accomplished by transformation of the academic workplace, not by stringing optic cable.”

But this does not make that cable insignificant. As Bousquet explains, when the first online class moved an automated education into the realm of the adjacent possible academic administrators embraced “a version of one of the oldest fantasies in industrial history, the fantasy of profit without workers…with a mechanized higher ed, a line of tuition payers could be run through automated courses that provide them with the “necessary information,” and out the other end would emerge nurses! Teachers! Engineers! Sports psychologists!”

After all, who cares about standards when there’s money to be made?

That Bousquet passage is what I think separates this argument from anything that Rick Santorum might say. The journey from Point 1 to Point 3 in this instance isn’t a particularly long trip because Bousquet’s “oldest fantasy in industrial history” is present at every step.

Despite that fact, I don’t blame Jen at all for creating a monster because most of the Dr. Frankensteins of the academic world have the best of intentions, and their creations are only in the first stages of running amuck right now.  Point 1 doesn’t necessarily have to lead to Point 3, if you keep control of your own monsters!!!  And if they won’t let you control your own monster, stop experimenting with dead bodies from the graveyard immediately.

With all seriousness, folks, you never know whose brain the powers that be will insert into it.

* From that same “Wired Campus” piece:

Reached by phone, Lesley A. Dean-Jones, chair of the classics department at Austin, said she would not comment on “personnel matters.” Asked if she would be willing to talk about the challenges relating to “succession” in online courses generally, Ms. Dean-Jones said no and hung up.

Yeah, if I inserted an abnormal brain into a seven and a half foot long, fifty-four inch wide gorilla, I wouldn’t want to talk about it either.

“Freedom’s just another word for nothing left to lose.”