Skip to content
From start to finish (minus another book in the middle) it took thirteen years to get Refrigeration Nation into print. The problem was deciding the level of focus that I wanted. I was drowning in material long before Google Books got large enough so that I could have spent the rest of my life trying to read everything ever written about the ice and refrigeration industries. But since there hadn’t been another book published on this subject since the early-1950s, I opted for a long relatively shallow history that offered a little bit about most of the things that I had researched rather than any kind of deep dive. 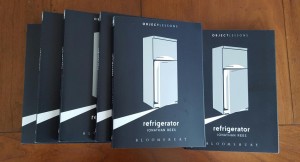 Yes, Refrigerator has arrived. It’s not just a cool-looking book. It looks like an art book to me. I expect to see it in small independent bookstores on a rack with all the other cool books from this series any day now.  Then I’ll go buy myself an expensive cup of coffee.

I hadn’t expected this when noted Renaissance Guy Ian Bogost recruited me for this assignment after reading one of my MOOC diatribes and seeing that I wrote about refrigeration. What I did expect was that this would be my chance to write about a lot more than the history of refrigerators, and it is.

At one time, Refrigeration Nation was going to have a Chapter Nine about the present. A lot of that stuff is in here. So is my experience walking around Lowe’s and Home Depot the summer before last and staring at refrigerator tags.  And so is everything that learned window shopping for refrigerators on Amazon.com [Yes, Amazon sells refrigerators. How? They call you within a few days to set up a delivery window. And of course they specialize in the REALLY expensive ones.]

I also devote even more space to the question of why American refrigerators are so darn big. Among the characters making appearances in this book are William “The Refrigerator” Perry, Mr. Freeze and former Obama Energy Secretary Stephen Chu. This ain’t exactly a conventional history book (in fact, it’s not really much of a history book at all), but writing it really was an awful lot of fun.

Coincidentally, I just handed a manuscript to my editor at Hopkins a week and a half ago for another closer look at refrigeration.  How We Used to Get Ice gets into greater detail about the American ice industry and even covers a few aspects of refrigeration history that weren’t in either of these other books because this subject is still just that wide open.  That book is much more scholarly than Refrigerator (in some ways more so than Refrigeration Nation even), but I’m still hoping antiquarian types obsessed with the ice man might want to read it. After that, I have one more thing to publish about refrigeration – an article on refrigeration and mortality for an economics journal co-written with my brother. Then I think that’s it for me and the cold, at least from a publishing standpoint.

So what’s next?  I’ve been very slowly working on a food history-related biography for a very long time now, but the going has been very slow because getting to the Library of Congress where his papers are is so hard. There are almost no funds for research in DC.  Furthermore, this guy has so many boxes in his collection that I can CamScanner everything in sight for a whole day and only make it through five boxes because you still have to read like crazy to decide what documents you want to shoot in the first place.

So I’m gonna simplify. Instead of being the refrigeration and food history and edtech guy, I think I’m just going be the history of technology guy.  Period.  I have two more chapters of the edtech book that I announced here to write before our February deadline, then I think I’m going to try my hand at something completely different  – a general history of the electrical grid in America.

Yes, the history of electricity in America has been done, but as far as I know not with an emphasis on the social impact of this technology and not by me. I’m going to write it better.  I’ll make it interesting enough so that my Dad (whose favorite thing in the world to do on weekends was to read 700-page presidential biographies) would have enjoyed it.

I think I already understand what this decision could mean. One of the great things about this Bloomsbury experience is that they hired a book publicist for all the Object Lessons series. You’ll see links to the fruits of her work (at least her work for me) in this space over the next few weeks. How am I ever gonna go back to the farm now that I’ve seen Paris? My goal for the future is to get an agent, a decent advance, a couple of fellowships and then to sell books to the masses – with an occasional edtech-related diatribe thrown in so that I don’t feel left out of all the fun.

And with all the extra hours I get from only writing one book at a time, maybe I can enjoy living a little more.  As much as I love all my readers here, I gotta say that this not blogging very much thing has already done wonders for my outlook on life.  After all, being outraged two or three times a week takes an awful lot of energy.

* Oddly enough, there is already a new general history of refrigeration out since Refrigeration Nation came out in 2013 and a new one coming very soon. Great timing, huh?

With or without edtech.