“The main thing in our design is that we have to make things intuitively obvious,” reads a quote from Steve Jobs in Walter Isaacson’s authorized biography. “People know how to deal with a desktop intuitively. If you walk into an office, there are papers on the desk The one on the top is most important. People know how to switch priority. Part of the reason we model our computers on metaphors like the desktop is that we can leverage this experience people already have.”

The only experience I’ve had that serves as leverage for setting up a gradebook on BlackBoard is using Windows 95, and even then (as an Apple user since the late-1970s) I never subjected myself to that experience voluntarily. I didn’t exactly decide to use BlackBoard voluntarily this time either. I’m still working on an all-online US History survey class for the fall. For years, I’ve been on the receiving end of the question, “What grade am I getting in this class?” and I’ve always had to explain that I don’t do any math until the end of the semester, but you’re welcome to use the percentages in the syllabus to make a close estimate. That explanation is invariably met with dirty looks.  I don’t feel comfortable employing that option anymore in a class where I won’t physically see students on a regular basis. Hence, my jump to this particular dark side.

And oh man, is it dark! I mean, I’ve been hating on Learning Management Systems for years now simply based on three disastrous training sessions in the early 2000s and a lot of secondhand stories. Oh yeah…there’s also this: 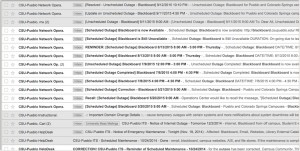 That’s a fuzzy (due to shrinking) screenshot of when I search my e-mail for just a few of the notifications when my university’s BlackBoard has been down for service.  So why subject myself to that kind of heartache?  The things I’ll do to prove a point about faculty autonomy…

Anyhow, in order to properly convey the Pete Puma experience to those of you who have never used BlackBoard, let me focus on three problems I had on the way to getting my gradebook up and running.  The very first one was simply making my course available to students.  If BlackBoard was gonna follow anything like the Steve Jobs Rule above, this would be the easy place to do it, right?  No such luck.  Here’s the minute and fifteen second video BlackBoard produced to explain what Jobs would have done with a single button:

To sum up: You have to access “properties” from the “customization” section of the control panel. The availability function is the third thing down that page. That’s right, the first thing you have to do with any course is buried half way down a page in a menu at the bottom of the control panel listed under titles that sound like they have nothing whatsoever to do with making your course available.

To be fair, I think the second problem I faced is because of the way my university runs BlackBoard rather than BlackBoard’s design per se, but it’s still bad enough to taint the entire experience. When I created the gradebook, there were twice as many names in it than I had students. Apparently, anyone who ever signs up for my course gets listed in the gradebook even if they switch sections or drop before the semester starts. The crazy thing though is that instead of simply deleting them from my book by checking their names and pressing “delete”, I had to delete all of them as “users” from this course so that they wouldn’t show up in the gradebook student list. Totally counter-intuitive and again I had to watch another video to find where that function was buried in the column on the left column of the dashboard.

My last problem was with the columns in the gradebook. I’m used to using Microsoft Excel for grades where you just enter numbers and write a function, but every column in a Blackboard gradebook has properties. Date created. Date the assignment is due. Total number of points available. Whether the assignment has a number or a letter grade. Then you have to mark what view it gets displayed in. To move columns in the layout you have to drag them from a symbol on the left that looks like this: “{}” rather than actually drag them. It took some more video watching and a couple of very polite e-mails just to get this down because again it’s completely counter-intuitive.

Now imagine how many lumps I’d be taking if I built a whole class out of BlackBoard. Now imagine how students feel using a system built like this. Now imagine how all of you feel when BlackBoard comes out with a new version that changes the things that you took hours to learn. No wonder BlackBoard’s market share is tanking.

But no matter how many lumps BlackBoard has already taken, I think they deserve at least three or four more.  Indy EdTech 4ever!!!

What If Some Faculty Don’t Want to Come Back to Campus?