It seems as if it’s been a very long time since I’ve written anything about MOOCs. To be honest, I’ve been avoiding clicking on MOOC links entirely in order to avoid the urge to write about them. Unfortunately for everyone, last week I accidentally came across a story with a MOOC section so scary that it should send shivers down every faculty member’s spine everywhere. So let’s do the time warp again and party like it’s 2012:

One insight may be to think differently about how academic assets like MOOCs are marketed and, more importantly, assessed. Consider this evaluation of a MOOC at Kennesaw State University. KSU offered its first MOOC in 2014 — the K12 Blended and Online Learning MOOC (K12BOLM). According to an assessment of the MOOCs first run,

“By traditional measures, the first iteration of the MOOC aligned as expected. Enrollment decreased weekly. Of the close to 6,000 learners initially enrolled, 40% were active in week 2. At the conclusion of the 8-week guided course, 6% of the learners enrolled in Week 1 successfully completed all aspects of the course. This included weekly discussions, video embedded quizzes, readings, peer-graded activities and three unit level assignments.”

I know this is bad of (particularly since the school in question is at least one or two rings on the prestige ladder above my employer), but the first thing I thought when I read this was, “Kennesaw State has MOOCs?” To be fair, so does the Clayton Christensen Institute for Disruptive Innovation, but it’s not the quality of the MOOC provider here that gets my goat. It’s the fact that Kennesaw State must have something better to do with its money.

For example, KSU’s last reported six-year graduation rate is just 42%. They could have taken all the money that went to Coursera (through the University of Georgia system) and spent it on scholarships, or maybe giving decent wages to their adjunct faculty (who, according to this site, make 58% less than the national average for adjunct instructors) or even building a new building that their existing students could conceivably enter and use one day. But no, Kennesaw State had to get their own MOOC.

So what happens when you invite a platform vendor like Coursera into your university? The whole governance structure of the place changes. These are slides from Paul-Olivier Dehaye’s #DLRN15 presentation that deserve to be tattooed on the chest of any administrator at a college that’s thinking about MOOCs when they have students who are already enrolled their who deserve first crack at those resources. Think of them as before and after: 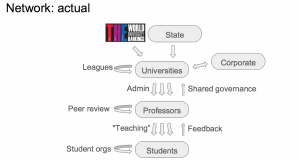 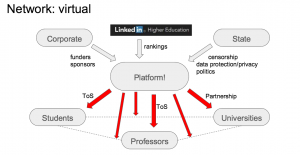 Once you have a hungry edtech startup in the middle of your governance structure, it’s hard to get them out. MIT and Harvard have the assets to feed the beast, I’m guessing Kennesaw State University does not.

So how does Kennesaw State justify its time in MOOCs?:

Some skeptics might consider KSU’s experiment a failure because of its low completion rate. But in evaluating this MOOC in 2015, KSU looked at other factors, including social media mentions. And, in fact, the MOOC helped to increase brand awareness: “Over 25,000 Twitter Hashtags Tweets and Re-Tweets were documented. … More than half had never heard of the institution. Another 25% had heard of the institution but were largely unfamiliar with it.”

I think they would have gotten even more brand awareness had they lit $350,000 on fire in the football stadium during the homecoming rally, but who’s counting?

If anything I think example shows that everyone wants to be a MOOC producer. Nobody wants to be a MOOC consumer. This would explain Coursera’s over-reliance on university partnership funds and nano-degree certifications rather than licensing fees for all the courses they’ve created. Flipping you class with someone else’s lectures is an admission of inadequacy, which is why it is extremely hard to find any self-respecting college professor who has done this voluntarily.

This explains why those of us who are interested in the whole MOOC life cycle can now look forward to the Darwinian struggle stage. It costs money to pay graduate students to police discussion forums. It costs money to license old photos. It costs money to update your MOOC continuously. Eventually, increased “brand awareness” will not be enough. The first MOOCs to go will be the ones that don’t attract enough people willing to pay for certificates. Then the next MOOCs to go will be the ones that don’t fit into those micro-degree programs. By the time Coursera disappears, most of its current offerings will already be dead letters. 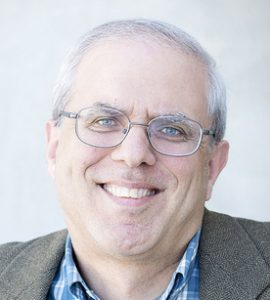